This page is for our successfully Kickstarted 1-2 player version of Dead Belt.

Not everyone’s got the temperament to be a Belter. Plenty of folks crack when the grav cuts out and the lights go off. Plenty more jump at shadows when their flash starts to flicker. Others are too busy watching their O2 to see opportunities.

No one’s coming looking. No one knows you’re here.

Dead Belt is played by building a Belter and taking them out into the Belt to scavenge randomly-generated starships, using things you already have laying around: a six-sided die, a deck of common playing cards, and a few tokens of whatever sort happen to be close at hand.

With a dozen unique ship deck plans, over 100 flavorful prompts, and plenty of character stats to help you avert certain death, no two ships will ever feel the same. You’ll board these derelict starships, navigate barriers, dodge threats, monitor your air-supply, and salvage as you go.

You’ll deal with all the dangers lurking onboard these starships, push your luck, and finally return to spend your hard-won booty to secure better equipment, improve your skills, pay down your crippling debt, and hopefully, maybe, eventually set yourself up to live out your dreams far from the Belt.

There are three ways to play Dead Belt: Solo, Co-Op, and Rivalry.

(Above) See it Played: Don't miss the actual play video below to see how a few gamer-household staples and a big pile of interesting and evocative prompts make for the most fun you'll ever have dying in space.

"Dead Belt is the solo RPG for anyone who thought they would never play one. Instead of making you write a novel, it’s edge-of-your-seat tension with every flip of a card. You will believe you’re out there and space wants you dead." - Third Floor Wars Craig

"Remember it's a mighty vast, mighty cold world out there. And if you ain't got the grit, you ain't got the determination. Well, you know, some of you folks ain't going to make it, but for those of us, Belters, I mean, there ain't nothing sweeter than cracking into a ship and finding that payday. See ya space cowboy." - Black Dragon Dungeon Company

"Late-stage capitalism is a shitshow." - A Couple of Drakes

In order to download this game you must purchase it at or above the minimum price of $20 USD. You will get access to the following files:

You read me, Chariot?

It's rough out here. Regardless, I appreciate you.

re: the payday... if I roll a 1-3... Oracles say "the Payday you came for is junked. Reminder: The oppposite of every choice you don’t take happens". Core says I could "spend Grit to salvage the payday by using it as normal"... what's normal out here? sounds like on a 1-3 I can spend a Grit to salvage, or not, and the opposite of every pick list item happens either way.

ok, per Core, if i don't salvage then i ignore the pick list. so that stuff just doesn't happen. so my question really is, if i do salvage, does the opposite of every pick list item happen? (including spending another Grit)

Reply
A Couple of Drakes2 days ago(+1)

Chariot copies all Lima-Charlie, Belter. Let's have a walk through the Payday move right quick and see if we can't get you back to scrappin' and salvagin' without any undue brain-frizz.

So when you roll for a Payday, like rolling for any other prompt or move in the game, you will roll a d6 (unless you decide to spend some Gear before you roll, in which case you'll be rolling 2d6). On a 1-3, as usual, the worst happens--you've come all this way for a stripped or busted payday. But you're a Belter with luck and grit. Just like any other bit of bad news, you can spend Grit after the fact to boost your failure into a mixed success, the 4-5 result on this prompt. IE, you choose two of the bulleted options on the Payday move picklist which are true, and the others are false. So if you don't spend one of your choices on "You don't need to spend Grit to remove it," you do indeed need to spend a Grit to remove it, in addition to the Grit you've already spent to boost your 1-3 to a 4-5.

Hopefully that scrubs the signal and makes it a little clearer for you, Belter. But if it's all still broken/unreadable for you, send another wave and we'll hook and jab our way through a payday together step by step and see if we can't make the weird make some sense, square?

Gonna loiter on this station a while, Belter. Pulse the crackle and hum button if'n you need. Chariot, out.

roger that, Chariot... those dots got connected and i'm all straightened out.

Thanks y'all. Loving the game. Been giving Roll20 a ride, too, works pretty nice.

Hey Drakes! I'm really enjoying the game but I'm unclear about Spacewalk move. It says what happens when I draw only red cards, or two black cards, or one black and one red. What if I got a mixed success, drew only one card and it's black? Does this mean "no success, but also no resources spent"? That's what made sense to me, but it's unclear in the rules. Help?

Reply
A Couple of Drakes5 days ago

You've got it exact, Belter. If you get a Black card as your only draw, you're going to need to roll and draw again.

Also, unless I'm misreading things, there's a bit of a loophole with Spares Bank? Once I have it installed, I can buy Spare Bits for 1 cred and it makes no sense to buy any Grit or Gear for 2 cred. I can just enter the Airlock on a new Bird and take the stuff I bought for cheap from the Bank. Is this on purpose? Or am I misunderstanding how Gear and Grit work?

Reply
A Couple of Drakes5 days ago

Having to walk back to the airlock for your spares is a hassle. Expanding your "On You" Grit, Gear, and Glow means cutting down on trips and minimizing the risk of a bad run of gas-checks cutting your trip (or career) short.

Sure, but I'm starting in the Airlock. So if I have no Gear left after previous run, I can just spend 3 cred, put 3 Gear in my Spares Bank, and as soon as I get to the new Bird, I load that 3 Gear into my pack and start exploring?

Or does Gear, Grit and Glow actually reset before each run, and paying full price permanently increases the reset value?

Reply
A Couple of Drakes4 days ago

The 2 cred upgrades increase the max grit or gear you can carry. After each run, you'll need to refill both your personal inventory and your spares bank with "Spare Bits." Whichever track you fill--bay,  carryall, both, or neither-- the price is the same. 1 cred for three bits. Mix and match.

Wow, I completely misunderstood the way this works then! Thank you so much for explaining. I guess I need to make a new Belter now and play it the right way, hopefully I'll have better luck.

follow up question - does the cost to increase your max Grit/Gear/Glow/Load also include any bits?

money for nothin', and your grit for free...

I completely missed the Kickstarter, but I’d love to pick up a physical copy. Is there a mailing list I should be on to get notified when they become available?

Reply
A Couple of Drakes18 days ago

Absolutely! You can sign up for our mailing list here: https://acoupleofdrakes.com/join-the-mailing-list
It's also a great idea to follow the Knave of Cups game store; we send official retail copies of our games to them before anywhere else: https://knaveofcups.com

Reply
A Couple of Drakes70 days ago

Howdy, Belter! Glad to hear you're getting on well enough to have questions about the biggest Beltin' Bird going. The Albatross can mount the largest Spares Bank available on the Belt, the 7-Slot Spares Bank (available at all reputable and less than reputable refit stations for 7 Cred).

Looking at the sheet, I'm seeing the confusion though. Each upgrade is indeed a mark on the Spare Bank Expansion category on the sheet. And we are looking at a weird number of bubbles on the bank itself. We'll get that sorted and polished once we're clear of space-plague. Play it as it lies for now, and we'll get it all ironed out.

Thanks for the extra eyes, Belter. This is why we're lucky to have y'all out there.

Thanks, good to know. Another point of confusion is that under goods and services the spares bank expansion 2 provides 8 slots for gear, grit and gas for 8 cred. I'll just go with 7 for now! Again, super cool game.

Hi Drakes.
A question about the void rat.  Does the vent rat ability still work if the ship is breaking up?  Should you re-roll if the destination threat area is on the other side of the break?

Reply
A Couple of Drakes72 days ago

Yeah, Belter, turns out that Void Rat doesnt mean you get to walk in space for free. If the ships come apart and your rolled destination is drifting into the great beyond, you're not getting there without a spacewalk. Feel free to give the dice another shake and see where you end up otherwise.

Will there also be a way for those of us who accidentally misread the closing date of KS to order a physical copy similar to the kick starter?

Sorry to hear we missed you for the campaign! As it stands we'll be taking care of printing and distribution for the Kickstarter. When that process is done and settled, we'll most likely be left with an overage of the physical zines to cover shipping mishaps and suchlike. Any of those leftover copies of the physical edition will be posted up here on Itch as available. Short answer is currently "no." But come fulfillment time, 'round May 2023? Resounding Yes.

Good to know! Just finally got to really get into the game and I absolutely adore it. Haven’t had solo rpg experiences this tense since Ironsworn was in early access! Will be keeping an eye out to snag one of the physical copies  :D

Reply
A Couple of Drakes99 days ago

We'll be loud and proud when they're available, Belter. Glad to hear you're enjoying your time on the Gasping Frontier!

How do those of us who backed the KS access this?

Our email with all of the Kickstarter keys is awaiting admin approval through Itch.io. Hang tight. It's on its way.

Any updates on the email issue? Hoping to play for the first time this weekend (fingers crossed) :)

So much so that I was looking around to buy the older version which I see is no longer available.

Still waiting on the email from Itch.io Admin, unfortunately. Glaring at our inbox like it owes us something is so far proving ineffective. I'm holding out hope that it's going to be rectified before too much longer, but on the off chance that there's no word, shoot us an email at ACoupleofDrakes (at) Outlook and we'll at least get you the ashcan version to tide you over.

Because this is frankly ridiculous, and y'all have been patient enough. 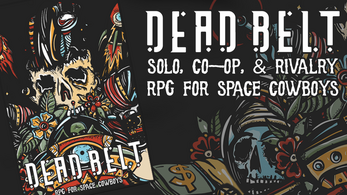 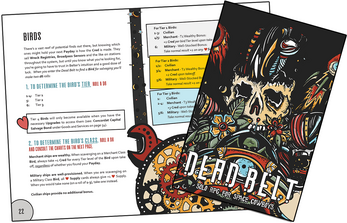 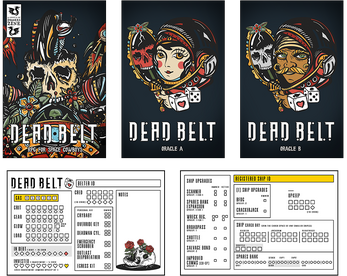